“Let’s go to Sulphur Picnic Area tomorrow” I suggested to Barb Hussey on August 12. Not able to join Thursday Birder trips, we have been birding together in the mountains every Thursday since late May.

With the exception of making a quick stop near the parking lot, I haven’t really birded the picnic area for quite a while. One of the drawbacks is that the only vault toilets are at the far end of the entrance road.

I arrived first and found a parking place in the shade, then walked down towards the entrance to wait for Barb.

“I have seen a Calliope Hummingbird and several Dark-eyed (Gray-headed) Juncos,” I told her when she joined me.

A flycatcher flew across the road – Western Wood Pewee. In the trees near the entrance a Warbling Vireo gave us good looks and we heard White-breasted Nuthatches nearby.

As we walked past the riparian area, there were Yellow-rumped Warblers and an Olive-sided Flycatcher perched to show off its vest.

“It looks like this is a good spot for sapsuckers this fall,” I pointed to dried-over sap holes on a ponderosa near the entrance to the picnic area.

As we made our way across the picnic area on the paved path, we could hear what sounded like a Red-tailed Hawk – and then saw that it was a Steller’s Jay doing an imitation.

We continued to follow the paved path. A molting juvenile Hermit Thrush perched fearlessly on the edge of a picnic table.

We watched Spotted Towhees, a Grace’s Warbler, Chipping Sparrows and a Cordilleran Flycatcher.

“That would be unusual here,” I responded, and focused my binoculars where she was looking. “It’s a female Williamson’s Sapsucker!” 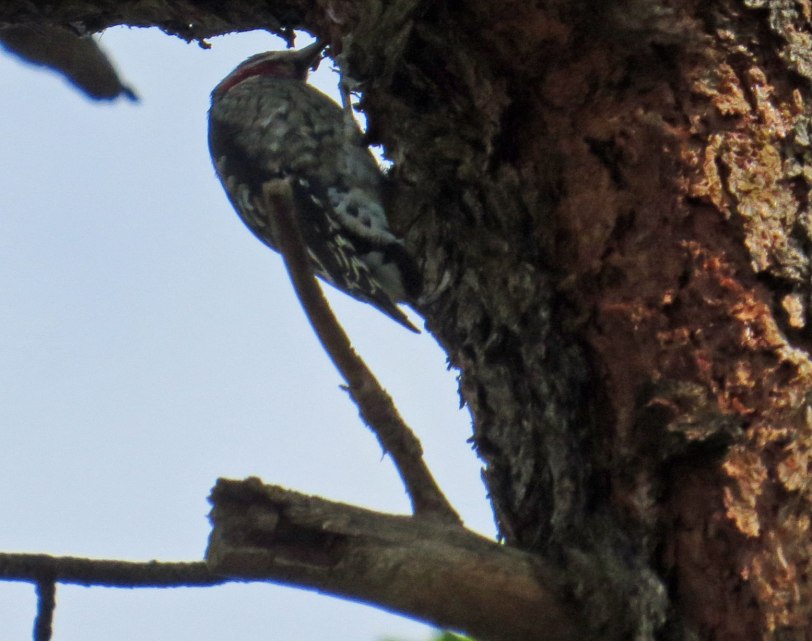 They were very high up in the ponderosa – and kept moving around to the back side of the tree. Then they flew off out of sight.

A little further on, we heard tapping – a Red-naped Sapsucker. How lucky could we be to have both of them in the picnic area.

The trail emerged near the vault toilets. We continued walking up the slope on the service road.

“I hear a Brown Creeper,” I told Barb.

“And there it is,” she pointed and we were able to observe it walk up a tree, then fly over to another tree and repeat the process.

We watched the antics of a Abert’s Squirrel.

Along the service road we saw MacGillivray’s Warbler and heard a Plumbeous Vireo.

At the end of the service road, we walked up the Sulphur Canyon Trail 281 for about half a mile, seeing some of the same species we had already seen and adding a Hairy Woodpecker.

By the end of our visit we had seen 26 species and had been able to walk most of the way in the shade of the trees. It was an easy walk and according to the mileage recorded on my eBird app, we had walked 3.81 mi.  We only encountered one couple on the picnic area trail and only a few others on the road and trail, making it easy to bird.

The Sulphur Canyon Picnic Area, at 7,200 feet can be accessed at the first turn-off on your left after entering the National Forest as you ascend the Crest Road (NM 536).

One thought on “Birding Sulphur Picnic Area in Mid-August”