Birders Helping Birders – The Generosity of the Birding Community

My experiences on Saturday reminded me again about how supportive and helpful the birding community is.

My day started at Albuquerque’s Uptown business center where a rare wintering Pine Warbler had been spotted earlier in the week. As I pulled into the parking lot at the business center shortly before 8 am, I saw Matt Bauman, a wildlife biologist, helping Joshua, a young teen-aged birder, to locate the warbler as it hop-scotched back and forth across Uptown Blvd. I had noticed from eBird reports that Joshua’s mom had brought him there twice before without seeing the warbler. Matt could have easily ticked off the bird and been on his way, but he stayed to make sure others saw it also. I lucked out and followed them around.

I met Joshua when his mom brought him over to my house last winter to see the Harris’s Sparrow that spent the winter in my yard. And it was Joshua who stayed around to make sure I saw the rare Rusty Blackbird near the Rio Grande Nature Center last November when he saw me walking south along the drain.

When the Pine Warbler finally stuck around in the same area for a while, another birder joined us. As he and I walked back to our cars, we introduced ourselves. “You’re the one who helped me find the cardinal at the Botanical Gardens a few years ago,” he told me.

“Now onto the Trumpeter Swan,” I told the others as I was leaving.

After stopping at the Sevilleta NWR Visitor Center to use their restroom, I drove across the highway to the Wildlife Management Area. I had picked Saturday to visit since the report on the New Mexico Rare Birds Facebook Page indicated that there was no hunting that day. As I drove down the main road, there were vehicles parked near a trail into the woods. They didn’t look like the types driven by birders. Then I spotted a hunter in camo and waders walking out of the wetlands with a rifle.

“I might have to search for the swan from my car,” I thought – then wondered whether the swans would stick around with the noise of guns.

I had not studied the map posted with the conversation about the swans. I remembered a friend telling me it was ‘way at the end of the road’ and I had seen ponds to the north as I drove along the freeway, so I turned north into the La Joya WMA, rather than south into the NWR property.

I passed a pond, but the dirt road continued. While it had been freshly graded, it still had a lot of ruts. 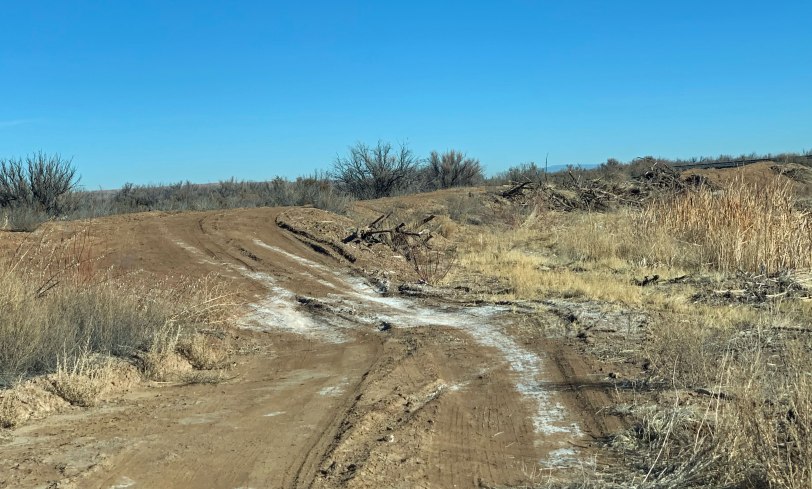 I wasn’t sure I should be driving on these roads by myself, but kept going until I was almost at US-60. With no ponds in sight, I decided to check the map on the rare bird post. Fortunately, I had cell service. When I opened the page, I noticed that Jodhan was there with some others. I had his phone number from last winter when he also came to see the Harris’s Sparrow and texted him. He confirmed that I should have turned south, so I retraced my steps. Fortunately, the road was well maintained driving south on the refuge.

As I was walking towards Unit A, Bernie, a friend, arrived and we walked together. When we arrived, Jodhan, Christopher and two other friends were leaving. Christopher generously takes young birders with him on his weekend jaunts and shares his extensive birding knowledge. Since the swans had been reported flying south around 8:30 in the morning, they were going to check out the Bosque del Apache. Kay, another friend, decided she couldn’t spend any more time, so she left. Bernie and I walked around for a while, but the swans didn’t reappear.

“I’m going over to Bernardo to do some birding and eat my lunch,” I told Bernie. ‘I will keep checking the rare bird report and see if anyone announces their return. I’ll text you if I get notice.’ Bernie, a self-declared ‘luddite’ only has a flip phone, so he was grateful.

I was finishing my lunch and was enjoying the Spotted Towhees.

Just as I was about to check the rare bird report again, I received a text from Jodhan: “They back.”  I sent Bernie a text, put my lunch things in the car, and headed back to Sevilleta where I was able to observe them and get a good photo.

Bernie and his wife Pauline were just arriving as I was getting back into my car. “Thank you so much for texting us – we were in Belen, but turned around and came back.”

As I was driving back out, I encountered Patrick who had driven over from Roswell. We chatted awhile since we hadn’t seen each other for a couple of years. He too had turned the wrong way. “You’re not far now,” I told him.

As I reached the intersection where I had made the wrong turn, I noticed a Forester also turn north – then stop. I pulled over. Clearly the car of a birder. They saw me and back up – Ruth and Deanna. I gave them directions.

As I was driving home, I pondered how the day had been about everyone helping each other so we could all see rare avian visitors. What I had witnessed that day had been an example of what I have experienced all over.

It isn’t just New Mexico. I travel by myself frequently and have been constantly rewarded by the helpfulness of other birders. All I need to do is approach someone looking through their binoculars and ask “What are you seeing?” The birder never acts put out, but points out what they are looking at.

Even on the crowded boardwalk at Magee Marsh, birders always shared what they were looking at and made sure others saw it also.

Even when there is a language barrier, other birders are always anxious to help. Once when I was birding on Quebec’s Gaspe Peninsula, I asked a couple what the bird with the beautiful song was. While they spoke some English, they only knew the French name for the bird. Together we laughed as we finally figured it out – it was a Bruant a gorge blanche, or White-throated Sparrow.

People who love birds are generous and take the time and effort to assure that others can appreciate these wonderful creatures as much as they do. I am lucky to be a part of this wonderful community.