There it was along the upper edge of a power pole on a small street off the Sandia Crest Highway – in the same location reported by other birders over the past few days. Its blackish-green head and back was muted against the cloudy sky, but its pinkish breast was visible – a Lewis’s Woodpecker. 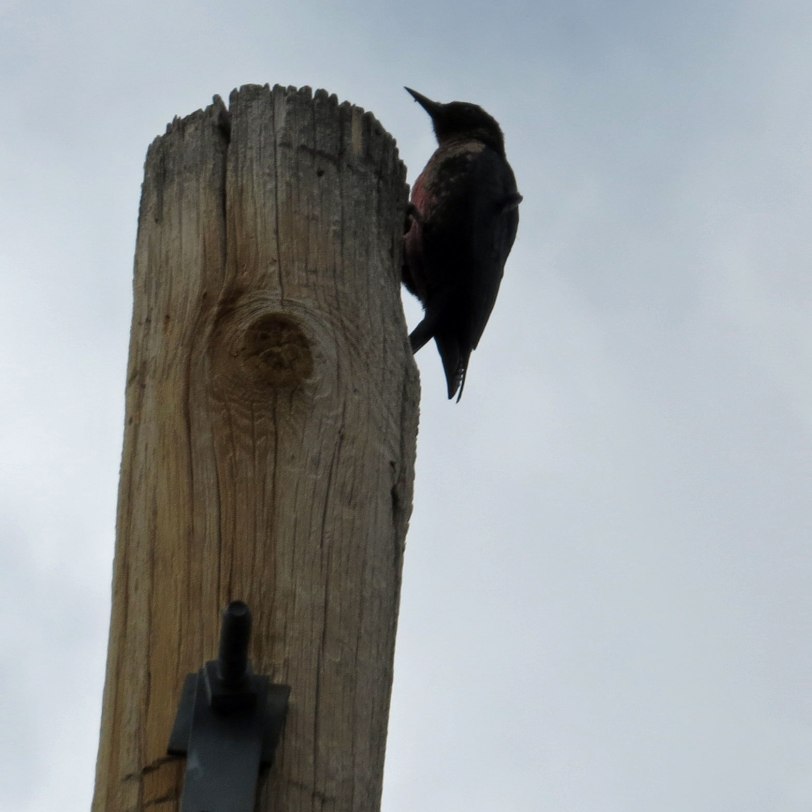 Every once in a while, it would look as if was flying away, and then it would reappear on the side of the pole. Unlike other woodpeckers, the Lewis’s Woodpecker doesn’t drill for to unearth insects, it ‘flycatches” its meals, snagging insects in the air. During the fall it also caches insects, as well as broken pieces of acorns, other nuts, and grains, in the grooves of bark for winter consumption.

Towards the end of August and into September, Lewis’s Woodpeckers that nest much further north, leave their breeding grounds in the northern Rocky Mountains and Pacific Northwest, and head for more temperate areas for the winter. An occasional one turns up in someone’s yard in the Albuquerque area in September.  If it happens to be a knowledgeable birder, it will get reported – like the one that turned up across the street from Ashli and Larry Gorbet in 2013.

This year they are turning up all over Albuquerque. “Never thought I’d see one, much less two, in my neighborhood…gorgeous!” Karen Herzenberg wrote in her eBird report on August 31. And, on September 9, Bernie and Pauline Morris reported a “loose flock of 12 flying south” through the bosque.

Possibly, all of the fires in northern areas where they breed are driving so many south this fall.

I remember the first one I saw. It was in the Watsatch Mountains in northern Utah. I was visiting my in-laws and had the opportunity to accompany local birders to monitor bluebird boxes. Afterwards, Pat Bean, a local reporter who wrote a regular column on birds, asked me whether I had seen a Lewis’s Woodpecker yet. When I answered in the negative, she cajoled the driver to go to a spot where they were breeding. I was amazed by the iridescent dark green feathers that stood out against the pinkish breast and red face.

Unlike other woodpeckers, it is not able to excavate its nesting hole, so it chooses dead or partially rotted trees for nesting, preferably with ready-made cavities, like this tree in the Valles Caldera National Preserve. The woodpecker is perched above the nest hole after delivering food.

Other areas where Lewis’s Woodpecker are reliable include Chama, along the Rio Grande in Espanola, and Pena Blanca in the fall.

I thought about the Lewis’s Woodpecker this summer when I visited Fort Clatsop National Historical Park in Oregon along the Columbia River where the Lewis and Clark expedition spent the winter of 1805.

While neither namesake species that was ‘discovered’ during the expedition, Lewis’s Woodpecker nor Clark’s Nutcracker, can be found in the area of the Historical Park, after my visit I had a new appreciation for the effort that went into the documentation of these species.

President Thomas Jefferson had chosen Captain Meriwether Lewis to head the expedition to explore the land west of the Mississippi River, and Lewis chose Captain William Clark to share the responsibilities. Lewis, according to biographers, had a “keen sense of observation and knack for writing detailed naturalistic and ethnographic accounts.”

On July 20, 1805 he wrote in his log, “I saw a black woodpecker (or crow) today… it is a distinct species of woodpecker; it has a long tail and flys a good deal like the jay bird” (Thwaites, R. G. 1905. Original journals of the Lewis and Clark Expedition 1804-1806 in seven volumes and an atlas. 8 vols. Philadelphia, PA: Am. Philosophical Soc.) A year later, Lewis was able to shoot a Lewis’s Woodpecker and preserved its hide.  After studying the skin, he wrote a 500-word description, but didn’t name it after himself. That skin is the only zoological specimen that has survived from the entire expedition, and today is a prized possession of the Harvard Museum of Comparative Zoology.

A few years later, according to the species description in Cornell Lab of Ornithology’s Living Bird, the ornithologist Alexander Wilson, working with skins that Lewis and Clark’s expedition had provided, described this species in his American Ornithology and named it Lewis’s Woodpecker in honor of his fellow naturalist. Unfortunately, Lewis never knew as he had died before the honor was bestowed on him.

The Lewis’s Woodpecker continues to be fascinating to me. While I often see it as I am birding in north-central New Mexico, I always look forward to the opportunity to spot one outside of its normal territory during its fall dispersal – and will now always think about the explorations of Lewis and Clark that documented this amazing species.