Summering Osprey – One of the Highlights of My Birding Year

Before heading back to Albuquerque Sunday afternoon (7-16-17), I decided to see if the Osprey juveniles were still on the nest platform, one of the locations featured in Birding Hot Spots of Santa Fe, Taos and Northern New Mexico. As I pulled up and rolled down the window, I saw the two juveniles perched on the nest platform calling plaintively 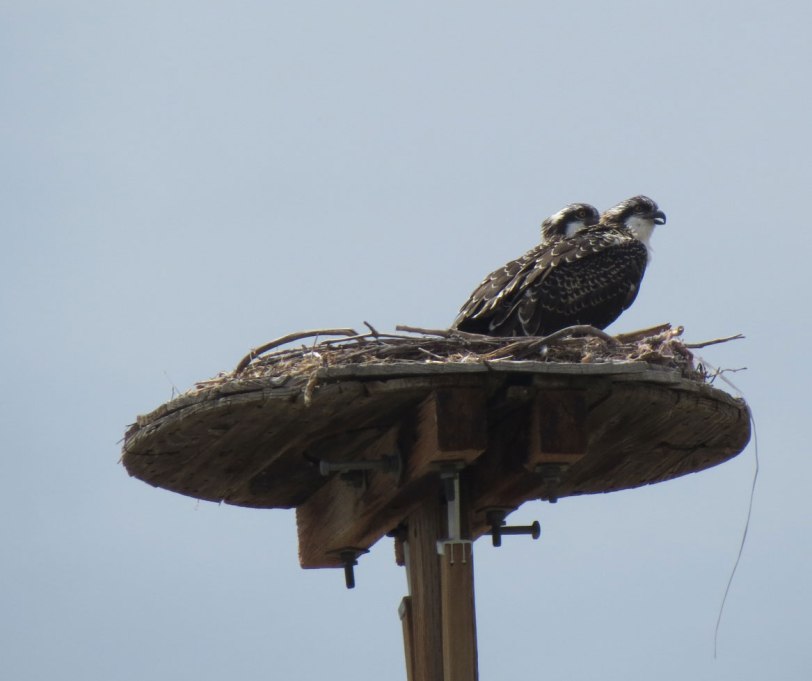 to the parent who was perched on the top of a nearby power pole.

The adult was calling to them, clearly encouraging them to take their first flight. The juveniles were resisting leaving the platform and wanted the parent to bring them food.

On another nearby power pole, Western Kingbirds seemed to be trying to demonstrate how easy it was to fly out and back as they chattered excitedly catching insects.  The young Ospreys paid them no attention.

As I sat there in my car waiting to see if they would take their first flight while I watched, I thought back to early April when the pair arrived back in New Mexico from the tropics.

Early each April I always lead one of the Central New Mexico Audubon Thursday Birder field trips to the Cochiti Lake area. Our stop along NM-22 to watch the Ospreys is always one of the high points of the visit to the area.

In 2016, we were lucky enough to watch the beginning of nest building. The male is generally the one who gathers the sticks and then brings them to the nesting site for the female to arrange.

If she doesn’t like the stick, she let the male know. On our foray to the area in 2015, we watched a dissatisfied female. After the male delivered a stick, she clearly didn’t want it in the nest. The male was gone and she kept hurtling herself into the air – stick in her talons – and circled over the nest area calling. When he didn’t return, she kept repeating the process.  We didn’t stay to see what finally transpired.

They use larger sticks as the base for the nest,

adding smaller sticks, and finally mats of grass to provide a soft cushion for the eggs.

Once the nest is complete, the female commences with laying 1 – 4 eggs. This nest normally has two chicks. The female does most of the incubation. The male will bring fish to her. She will take it to a nearby perch to eat, while the male incubates.

During incubation, I have seen the male eating a fish further along NM-22. I have to applaud him for not ‘eating in front of her.’

I don’t normally visit during the summer, but last year when Barbara Hussey and I were on our way back from doing a book talk at the Cochiti Library (the area is a featured spot in Birding Hot Spots of Santa Fe, Taos and Northern New Mexico), we stopped to watch the a juvenile still on the platform – being shaded by the female.

When the Thursday Birders return to Cochiti Lake in late September, we are often lucky enough to see one as it drops into the lake to capture a fish. Since it uses its feet to grab its prey, it relies on catching fish fairly near the surface of the water. After spotting a fish, it first hovers over it, then plunges, lowering its feet just before arriving at the water.

It grabs the fish with its talons and then raises up like a helicopter ascending.

Osprey just before ascent – with fish in talons

Remembering how big the juvenile was last June, I wasn’t sure whether this year’s young ones would still be around mid-July. I was delighted to find them.

After watching the two reluctant juveniles and parent complaining and encouraging for about fifteen minutes, one of the juveniles stood up, stretched, seemed to stand on tip-toe, and flapped its wings up and down. I grabbed my camera, but wasn’t quick enough to catch a photo of it lift off and fly over my car before landing below its parent. It then started yelling loudly at its sibling.

Ten minutes later, the fledged juvenile took wing and flew towards the lake, while the other juvenile and parent remained in a stand-off. The juvenile poked around in the nesting material, as if looking to see if there might be any food tidbits to be found. The parent patiently continued to call. I watched for another five or ten minutes, then turned around and headed back to Albuquerque. How thrilling it was to watch one of the juveniles fledge!

The summer arrival of the Osprey is always one of the highlights of my birding year.