“Let’s walk over and look at the refuge sign,” I beckoned to the participants in each of the two OASIS classes I taught at the Valle de Oro NWR this past week.

I shared that Valle de Oro was established four and a half years ago as the Southwest’s first Urban Wildlife Refuge as part of America’s Great Outdoors Initiative to work with community partners to reconnect people to the natural world.

“The mission of the National Wildlife Refuge System, established in 1903 is to manage lands and waters for conservation of fish, wildlife and plant resources – and to restore habitats if needed,” I explained.

“Of all the federal public lands,” I continued, “it is the only system that is focused solely on natural resources. It is one of our most valuable national assets.”

As I talked, we could hear the plaintiff call of a Say’s Phoebe on its nearby perch.

What a difference four days can make. When the first class convened on Tuesday, Albuquerque was experiencing above average temperatures. By Friday, it was 10 degrees colder and the wind chill made it seem even colder.

Our first stop both days was in the grassland adjacent to the old milking barn. While Western Meadowlarks were singing all around us earlier in the week, 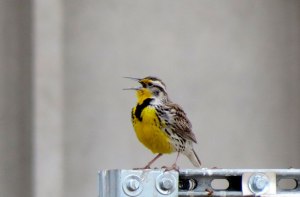 we could only hear a couple who were brave enough to perch on their elevated posts to sing later in the week.

“The males are establishing their territories,” I stated, “which is why they are perched up on perches.” We could see one on top of a light pole, another on the milking barn, and yet another on an irrigation post.

“When they are in the fields they are difficult to see. The brown streaking on their backs is perfect camouflage in the grass.”

Back of Western Meadowlark

We were also looking for Horned Larks that spend the winter at the refuge. As if on cue, a small flock rose up from the fields and flew across the refuge road. One of them landed on the dirt mound next to the road and I was able to get the scope on it before it flew off so most of the Tuesday class got a good look.  Alas, there were no Horned Larks on Friday and it was too windy to set up the scope.

Killdeer can also be found at the refuge year-round. “Let’s see if we can hear one,” I suggested to the Tuesday class. They are often walking around in the fields,

and their call, which sounds like their name, can help us locate them. We had the opportunity to see two of them flush from the fields, fly up calling, and then land again in the grass.

“In another month, they will begin brooding their young,” I told the group. “They don’t make nests, but instead lay their gray, speckled eggs on the ground.  You have to be careful as you drive along the refuge roads.”

A few Sandhill Cranes were foraging in the grass.

While there were still some cranes at the refuge on Friday, many had already headed north.

“Look,” a class member pointed on Friday. “There is about 50 plus cranes circling in the thermals above us.”

Our next stop was near the Bosque Eco Monitoring Project (BEMP) field.

“Savannah Sparrows like to use that field for cover when they winter at the refuge,” I indicated. 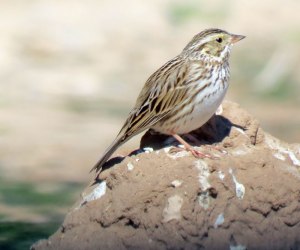 While both groups got to see the sparrows, they were more elusive on Friday and that group didn’t get good looks.

We parked at the far southwest corner of the refuge so we could walk into the bosque.

From the bridge over the drain we were fortunately to see a Black Phoebe and a Yellow-rumped Warbler on Tuesday.  Both were in constant motion as they flew out to capture an insect and then retreat to the branch – only to repeat the process over and over.

We stopped at the sign describing the restoration in the bosque by the New Mexico State Land Office.

We hadn’t gone far into the bosque on Tuesday when someone spotted a porcupine high in the branches of a cottonwood tree – a first for many in the group. 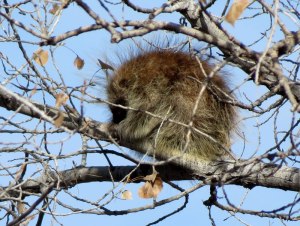 “They are nocturnal,” I explained. “They climb down from the trees during the evening hours to eat. They strip bark off of trees, particularly during the winter when other food sources are limited.

“Where do they go in the summer?” someone asked.

“They live in the bosque year-round, but during the summer months they are hidden by the leaves when they sleep,” I responded.

At the river both days, we saw Canada Geese, and on Tuesday a Common Merganser.

Along the river, we could hear a Song Sparrow in the bushes, and on Friday we were rewarded when popped up giving us a good view.

“Look in the trees across the river from us,” I motioned to the Friday group. There were five American Robins.

As we walked around the bosque loop trail, we saw Northern Flickers sailing between the trees.

Bewick’s Wrens were singing from within low shrubs.

On Tuesday we were treated to recently emerged Mourning Cloak butterflies wafting across the dry leaves. On Fri. we were delighted to have good looks at a Hairy Woodpecker busily drumming on a nearby tree.

While we only heard White-breasted Nuthatches on Friday, we were lucky to see a pair chasing each other across the trail as we completed the loop on Tuesday.

As we returned to the refuge on Tuesday we stopped to watch two American Kestrels hovering helicopter-style over a nearby field and on Friday we were treated to the same flight pattern as we drove back to the main entrance.

“It eats both insects and small rodents. Its eyes enable it to see urine trails of small mammals,” I explained.

It had been a fun week sharing my passion for birds and our public lands in my outdoor classroom at Valle de Oro NWR.