A bird was singing from the hillside in Embudito Canyon. I stopped to listen so I could locate it – and then suddenly a yellow Lab rounded the corner, sniffed at the edge of the trail and then scurried into the brush for a few minutes before returning. It was a gorgeous dog that was licensed. My first thought was that it was lost since I didn’t see anyone around. My next thought was concern for potential nesting Scaled and Gambel’s Quail since I had seen a couple of Gambel’s Quail hustling through the underbrush a little further down the trail and the males had begun calling from territory.

When I rounded the bend, a woman appeared with another dog and two leashes in her hands. She didn’t seem concerned that her dog had run ahead of her. I stopped, as I always do when dogs are running off leash. If one should try to jump up in friendly greeting, I want to have both feet firmly planted on the ground.

“I thought perhaps the dog was lost,” I suggested.

“Oh, no, I like to let them run free up here,” she answered nonchalantly.

“Dogs are supposed to be on leash,” I responded. “It’s the law.” 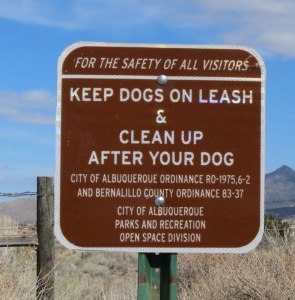 “Well, I figured this was a good location for them to exercise and explore,” she stated and then called them to put their leashes on.

This is a typical interaction I have when encountering people walking their dogs off leash. Most folks also assure me that their dogs are friendly – which is beside the point.

I frequently encounter people who take their dogs to spots along the Rio Grande bosque so their dogs can romp in the river. I observed this dog having a grand time frolicking – and chasing the gulls while its owner entered into the frolic.

Soon Canada Geese will start sitting on nests along the river, and Ring-necked Pheasants will brood their young nearby in the bosque.

I often try to point out hazards to the dog rather than the wildlife. When the weather is warmer, I express my concern about rattlesnakes. In the mountains, I might ask whether they know what our form of poison ivy looks like, especially when it is just starting to leaf out, and am able to point it out to them,

poison ivy starting to leaf out in Sandia Mountains

along with the comment that I would hate to the dog get it on its fur and then transmit it to them. Or, I might ask if they are aware that there are bears in the area.

Both of these usually prompt them to put the leash back on the dog.

There are other hazards to dogs off leash, including traps (It’s legal to set traps on public lands in New Mexico). Bait is often set out on or near trails.

According to Nick Pederson, a wildlife biologist with Albuquerque’s urban biology division of the Environmental Health Department, “Every spring/summer we deal with reports of coyotes tearing up dogs in open space while protecting dens. It doesn’t matter if the dog is big.”

A couple of years ago my friend Barb and I were walking up the Aspen Vista Trail near the Santa Fe Ski Area during the peak of fall colors. It is also a good time of year to potentially spot Dusky Grouse.

The trail was crowded with others wanting to admire the gorgeous aspens. Most of them had dogs with them – over 90% off leash. We had passed a couple, each with a dog on leash, who were communicating through sign language. A little further up the trail, we encountered a woman with two energetic dogs – both off leash.

“They are friendly,” she yelled at us.

We could, of course, hear her; however we thought of the couple who would not be able to hear her greeting.

And, don’t even think about seeing grouse on that trail with dogs darting in and out of the underbrush. Late September – early October is a good time, but only if you go very early in the morning. 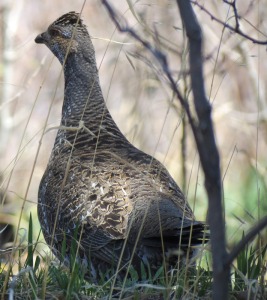 Since many birds are ground nesters and foragers, you can help keep birds safe by always walking them on leash and taking them to one of the many dog parks to let them run free and play.

Free roaming cats are another major threat to birds. I had a cat named Einstein for many years.

When I installed a dog door so my dog could go into my walled yard while I was at work, the dog was not sure that he could push the flap to pass through. In fact, it took quite a while for him to feel comfortable venturing through the door on his own. True to his name, Einstein, figured it out immediately and was through the door as soon as it was installed. Since he no longer had front claws and my yard was completely walled in, I initially didn’t worry. The lack of front claws and the wall were not deterrents, and he soon wanted to explore beyond the yard – until one cold, winter evening when I returned from work, he didn’t come running when I pulled my car into the driveway – and he didn’t come home that night, or ever.

I didn’t get another cat since I knew I could not keep it safely inside and still allow the dog needed access to the yard.

I now have a neighbor’s cat that is put out each morning and regularly visits my yard to peruse my feeders, drink from my pond and use a corner of my garden as a litter box.

While I never saw any of the birds that fell prey to my cat, I don’t kid myself that he was innocent. According to a peer-reviewed study released in 2013 by the Smithsonian Conservation Biology Institute and the U.S. Fish and Wildlife Service (FWS), “bird and mammal mortality caused by outdoor cats is much higher than has been widely reported, with annual bird mortality now estimated to be 1.4 to 3.7 billion.”

Even domesticated cats that are well-fed have a natural hunting instinct. To counter this threat, the American Bird Conservancy initiated a ‘Keep Birds Indoors’ campaign, which has been adopted by Central New Mexico Audubon.

A third threat to birds is windows. At my house, the window that has most often received the avian imprint 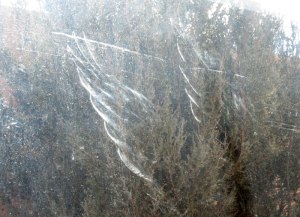 is the one opposite my bird feeder, which is placed strategically within view from my computer. While it is often the result of a Cooper’s Hawk flushing a white-winged dove towards the window to stun it and then easily retrieve its meal,

feathers are all that remain

other birds fly into windows because they see glass differently than humans.

According to the American Bird Conservancy, “up to a billion birds die in collisions with glass each year in the United States. Although most people have seen or heard a bird hit a window, they often believe it is an unusual event. Add up all those deaths and the number is staggering.”

I placed some of the bird tape on the window that experiences strikes. So far there have been no evidence of collision.

Bird tape from outside

While there are certainly other measures you can take to help keep birds safe, the three easiest are keeping your dog on leash, assuring that your cat stays indoors and protecting windows.