A juvenile Red-tailed Hawk flushed and flew low over the road, then landing on a nearby fence post as we headed south on Forest Road 151 near Ghost Ranch Conference Center. We were struck by how green the area was, compared to a visit in early June. A blanket of grass carpeted the ground beneath the sage scrub, accented by mustard-yellow chamisa flowers. Barb Hussey and I were exploring the area for inclusion in our next guide on birding hot spots in north-central New Mexico.

Mountain Bluebirds flew on and off the fence further along the road. A cluster of sparrow flew up and then landed in the grass, making ID impossible. Then we lucked out – a single sparrow landed by the side of the road and stayed long enough for us to see its white eye-ring, clear breast and streaking on its sides to determine that it was a Vesper Sparrow.

“This is wonderful,” I exclaimed. “All Cheryl and I saw in early June were a few Horned-Larks.”

A House Finch landed nearby and Barb sighed. “Karen Boettcher once told a group of field trip participants that seeing a House Finch is a sign of a good habitat,” I told her. “Maybe there will be more great birds.”

As we rounded a bend the habitat began to change to Pinyon-Juniper. A large flock of Pinyon Jays circled and landed briefly on a juniper and then were off to check out another tree. We estimated at least 60 jays were in the flock.

We stopped to check out another bird – a Sage Thrasher. There were three total. Nearby two Blue-gray Gnatcatchers chattered as they foraged.

We stopped at Big Eddy, the take out spot for rafting trips along the Rio Chama. The swallows that had nested in the cliffs were gone.

The single-track road headed up and hugged the side of the cliff before dropping back down where we sound our way through stands of willows and Narrow-leafed Cottonwoods where there was an abundance of Western Scrub Jays, regular residents, and American Robins – clearly on the move.

We could see the many geologic layers in the cliffs on either side of the canyon, which according to the Bureau of Land Management, “represents rocks of the Triassic, Jurassic and Cretaceous ages.”

Near the location where the Continental Divide Trail crosses the road at Chavez Canyon, the valley widened and we gazed at the salmon-colored cliffs on the other side of the river. We were surprised to see the white flash of the wing and tail patches as a Clark’s Nutcracker flew out of a tree and across the river. Another one popped up in the branches giving us good looks at its long bill and wide-eyed look before it joined the other one. A Juniper Titmouse also was working that tree.

Further along were a female Western Tanager, Black-billed Magpie and a Blue-gray Gnatcatcher.

After checking out the facilities at the Rio Chama Campground, we drove to the entrance of the Christ of the Desert Monastery and then started to work our way back.

A male Blue Grosbeak flew across the road and landed in tree briefly before diving further into the undergrowth.

“It’s probably just another scrub jay,” I told Barb as I stopped the car. “But we should check it out anyway.” It was the first of several Townsend’s Solitaire’s we would see on our return trip.

“Where were they when we drove along here earlier?” Barb commented. “Maybe they just arrived.” It was clear that the river served as a migration corridor.

We ate our lunch at the Whirlpool primitive campground and nestled the car against a juniper for shade. “Look,” I pointed, “another solitaire.” 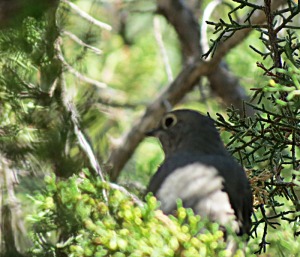 While only a portion of the river wilderness area can be accessed by car, it gave us a taste of the treasures along the Rio Chama Wild and Scenic River.

One thought on “Exploring the Rio Chama Wild and Scenic River”