Freshly-baked scones, coffee and juice awaited the 12 members of Central New Mexico Audubon and our guide, Christopher Rustay when we arrived at Ute Creek Ranch – known as Ute Creek Cattle Company in Bueyeros, Harding County. The enthusiasm of Jack and Tuda Crews for their newly-restored wildlife preserve and their environmentally-friendly ranching was infectious. After years of ranching in Wyoming, they returned to New Mexico to restore the ranch where Tuda had grown up.

After checking out birds around the restored ranch house, we walked over to the Tuda Libby Crews Wildlife Sanctuary – Tuda’s dream enabled by monetary birthday gifts from family and friends. Their website describes it as “an oasis for migratory birds, native prairie-grass birds, turtles and other critters.”

“Look at the roots of the grasses,” Christopher pointed out. They are green, not gray. If the land is over-grazed, the grass will be gray at the roots.” Thus began both a wonderful birding experience, as well as an educational one. I wish I had been able to carry a tape recorder to capture all of the information Christopher shared during the morning.

Our first and most prevalent sparrows were Vespers – easy to recognize with their white outer tail feathers, breast spot and conspicuous eye ring.

Grasshoppers with bright red wings buzzed as they flew up around us. Amidst this chaos, Christopher heard the insect-like call of a Grasshopper Sparrow. “Once they land, they will walk through the grass. The only way we can have a chance to see one is to surround it, which forces it to pop up briefly.” It reminded me of the experience of flushing Yellow Rails on the upper Texas coast.

The group loped over the prairie grasses to where we had seen it land and attempted to encircle it. It bounced up and just as quickly dove into another clump of grass some distance away. Fortunately, I had good looks at one on another birding trip, because I certainly didn’t feel comfortable adding it to my day’s list with only a glimpse.

Western Meadowlarks were calling and singing all around us. I had never concentrated on listening to the flight call before, as a way to distinguish between the Western and Eastern Meadowlarks, particularly in the eastern plains where the two species overlap. “Ryan used to say that the call of the Western was veet and the eastern freak,” Christopher laughed.

A Chipping Sparrow was on a fence wire and then flew across our path. “In the fall, look for the line that goes through the eye to distinguish it from other spizella sparrows,” Christopher recommended. “Also look for the gray rump.”

Our next sparrow was a Savannah. “There are many local variations. They might not have yellow in front of the eye,” Christopher said. This one didn’t.

We heard Horned Larks in the next field. “There also is an early Chestnut-collared Longspur,” Christopher stated. “It has a distinctive call note and often is called the giggle bird.”

Someone spotted a Ladderback Woodpecker, which stayed put long enough for everyone to get good looks.

There were several American Kestrels, a Red-tailed Hawk flying near the horizon, and a Prairie Falcon. “You can distinguish a Prairie Falcon when it flies from its ‘rowing’ flight pattern.” Christopher explained.

A mixed flock of birds flew in and landed on the wires and fence posts of the corral next to the preserve – Common Grackles, a couple of Yellow-headed Blackbirds, Brewer’s Blackbirds and Starlings.

“Grassland birding is challenging,” Christopher told us as we headed back, “they don’t divulge their secrets easily.”

Next we piled into cars and headed to another part of the ranch located down the road and then over a rutted dirt road that climbed up to some rocky hills. 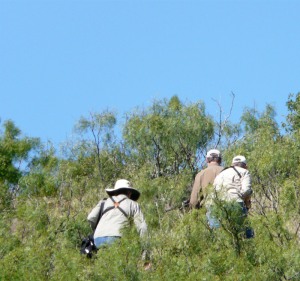 We checked out a stock pond, but there was no bird activity, only a myriad of dragonflies darting over the water. The heartier in the group started scrambling over the rocks. From the top, they spotted a handful of raptors, including another Prairie Falcon and a Sharp-shinned Hawk.

We then bumped over the ranch road towards the riparian area along Ute Creek. We were amazed at the extensive erosion and debris that had been carried along the creek from the heavy rains upstream a few days earlier. Jack just shook his head, dismayed that all of the work they had put into restoration had been swept away.

Christopher tried to reassure him that the area would return even better – just like after a fire,” he stated. Jack wanted to believe, but looked doubtful.

Three Turkey Vultures were devouring their carrion alongside the now-meandering creek and a Great Blue Heron stood hopefully in another location waiting for a meal.

Christopher pointed out a Goatweed Leafwing Butterfly. He had caught a glimpse of its orange upper wing before it landed. It looked like dead leaf hanging from a branch. A Wilson’s Warbler made a brief appearance.

A flock of blackbirds swirled into the cattails – Red-winged and one Yellow-headed. “Did you see the size difference?” Christopher asked.

We hoped for another chance at an ammodramus sparrow, but only Vespers.

As we sat under the portal of the restored ranch house, Tuda explained that the bird sanctuary was important to her as a way to leave something of meaning behind for future generations. For estate purposes, the ranch property has been structured to protect it in perpetuity so the land remains in the family and she is in the process of establishing partnerships with NM Fish and Game and Audubon NM, among other organizations.

As another income stream for the property, she has purchased and restored The Rectory behind the Catholic Church in the ‘nearby’ village of Mosquero as a Bed and Breakfast. “It can serve as a base for people who want to visit Harding County and take in its beauty and wildlife.”

Jack filled us city-slickers in on sustainable ranching. They are part of Country Natural Beef, which is available at restaurants and markets like Whole Foods. “Caring for the ranch is akin to raising children,” Jack is quoted as saying on the Country Natural Beef website. “The land must be nurtured, protected and sustained.”

We left with wonderful memories of the land, the hospitality and an expanded knowledge of grassland birds.

One thought on “Grassland Birding at Ute Creek Ranch”